We commonly understand the dataweave transformer to be used for data mapping, but not many people know that you can also invoke a mule flow inside of dataweave. Figure 1.0 shows an overview of how this invocation works.

Dataweave can only call flows, you can script data weave to call subflows, it will not error during startup of your mule application, but it will have runtime error if you try to execute the portion of the script where it tries to invoke a subflow.

As always the best way to explore something is to do an experiment on it. I have created a test application to test the concepts out. Figure 2.0a depicts how my test application would look like. 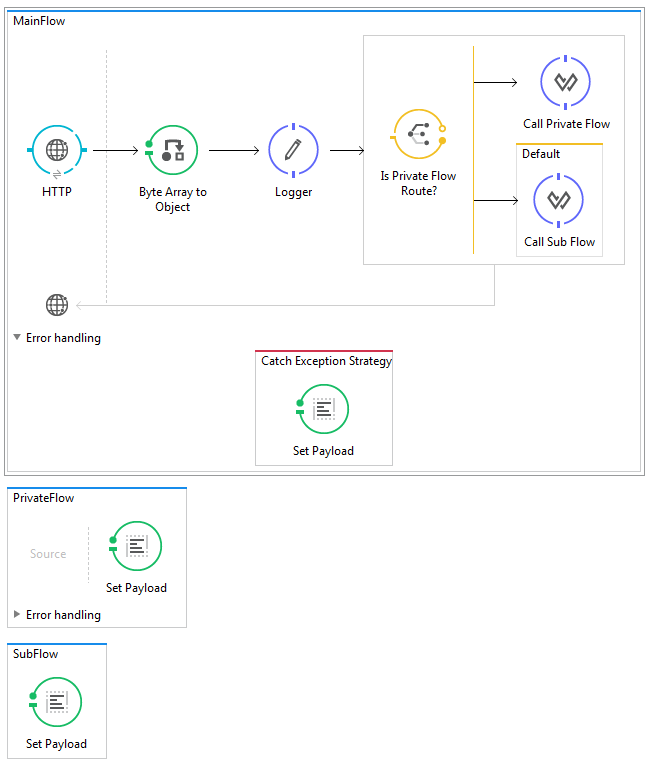 Upon starting up the application you would be able to test it via postman, with the following settings depicted in Figure 2.0b.

If you pass in “pflow” as the parameter and the following payload (Figure 2.0c).

You will get the following response payload.

Figure 2.0c
If you set the route parameter to “sflow”, you will get the following exception in your console.

As I have said earlier, you can start your application without issues if you try to execute a subflow from dataweave but you will always get runtime errors as described previously.

The following is the datawave code for calling a flow, it uses the lookup function in dataweave.

The mulesoft documentation do not really elaborate on the lookup function, hence I find the need to write this article to demystify it.

The following is the full mule configuration file that was created to test the lookup function.


Invoking another flow from within MuleSoft Dataweave is not a common thing to do, but if you are doing it and have a use case for it, please do share it in the comments section of this article. There are obvious pros and cons of doing it, one of the cons is that it won't be apparent to the developer if a dataweave transformer is invoking another flow, unless he or she look into the dataweave scripts.