1.0 Overview (the case for flow variables)

I came across a an exam question in Mule and pertaining to the relationship of Flow Variables and Batch Jobs. You need to pay attention to questions like this if you are to pass the mule certificaiton exams. When I try to google for the answer there is no article that has been written about it. Not in the mule documentation no any where on the web. So read on and get an understanding of how each type of mule variables behave in the context of a batch job (mule construct).


The question is something like this, given the following batch job.


And given the following input payload, what would flowVar.aCounter be at the end of On Complete?


This is how your thinking process would be, the payload has an array of two elements, which means one instance of the batch job would run and both batch_step_1 and batch_step_2 would be executed two times (one time for each record).


A batch job is not a flow but it can reference and execute a flow. Each step in the batch job executes as an independant flow, so the scope of the flow variable is really constrained to the individual steps, after execution leaves a batch step the flowVars is gone.

The following is logs collected if you run the batch job at Figure 1.0a.

3.0 The Case for Record Variables 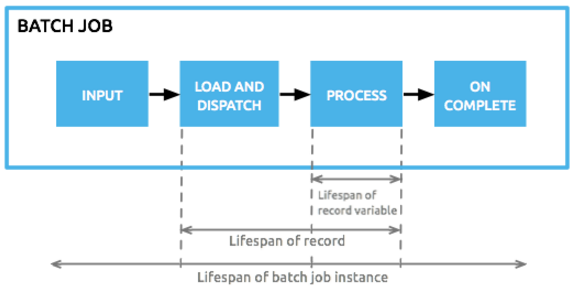 
To illustrate to you the life time of the record variable I have created the following flow. You can only start setting a record variable in a batch step, I have done it in Batch_step_1 (as per figure 3.0b).


Notice that I have used the expression message processor instead of the groovy message processor to set the recordVars.rACounter, the reason being is that the Groovy shell in mule does not recognize recordVars (take note, so that you don't have to spend hours trying to figure out why).


You cannot access a record variable at the On Complete phase else it will give you a runtime exception. The following is the full batch job XML to show how to correctly use record variables.


The code snippet at listing 3.0a will generate the following output:-


If you observe both the values of “flowVars.aCounter” and the “recordVars.rACounter”, you will see that only record variable can transfer its state across batch step, but once it is outside of the batch process area (where all the batch step is defined), it is no on longer accessible by the execution context.

4.0 How about Session Variables in Batch Jobs ?


If you observe the log file closely the clues on why it is behaving that way is really obvious.


From the logs you get to know that there is essentially 3 threads that is running. Setting of the flow and session variable happens at a thread named “[batchplayground].HTTP_Listener_Configuration.worker.01”, this is the receiver thread from the flow “batchplaygroundFlow”, because this flow has an inbound endpoint of HTTP it would automatically be an a flow with synchronous processing strategy. The other two threads “batch-job-batchjob_withnoInput-work-manager.01” and “batch-job-batchjob_withnoInput-work-manager.02” are disperae threads allocated by the mule run time to run both batch step 1 and batch step 2. In this multithreading environment both flow variable and session variables are not synchronized only the record variables are synchronized.

When using batch jobs, it always runs asynchronously and it always executes its batch steps in multithreading mode. Remember batch jobs are built for high throughput processing. If you want the behaviours of your batch job to be predictable always use only record variables because they are synchronized between each batch steps.
Posted by Kian, Ting at 4:08 AM 9 comments: