This tutorial will walk a user through on creating a custom mule component where you can use it via the Mule Palette (in Anypoint IDE) during design time. In this article I will show you how to create the connector install it into your Anypoint IDE. I will also demonstrate how you can use it in later mule projects. Besides that I will also go through the necessary maven settings and repository installation that needs to be in place for projects to start using it.

Step 1 is creating an Anypoint Connector Project (as depicted in Figure 2.0a). 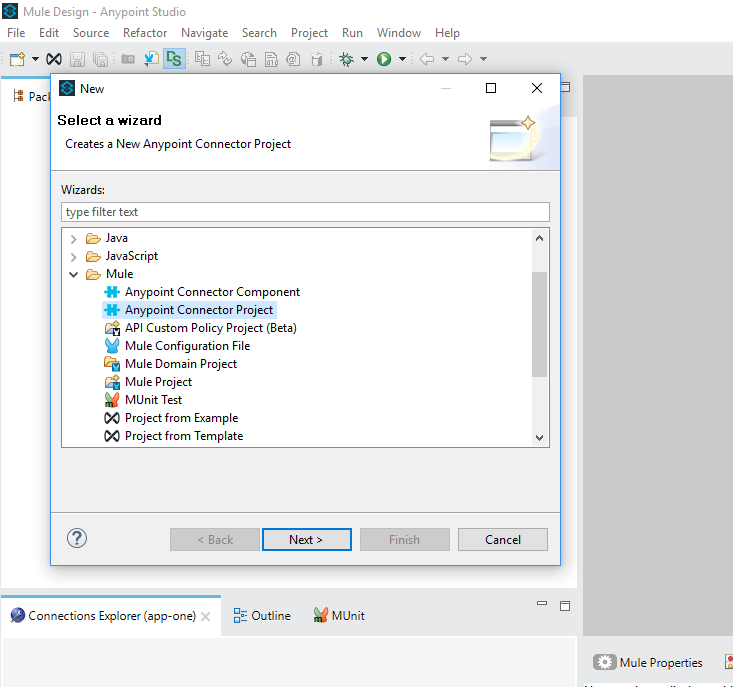 Choose SDK Based and click on Next Button (as depicted in Figure 2.0b). 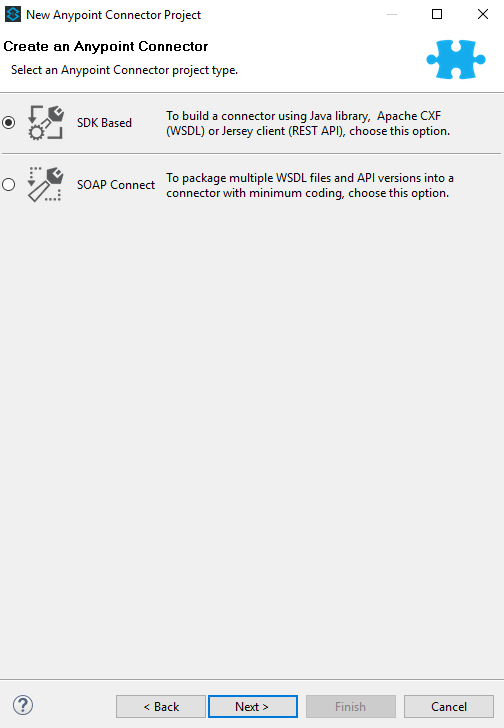 Now key in the desired connector name, here for demonstration sake I will just use my name (depicted in Figure 2.0c) and click Finish. 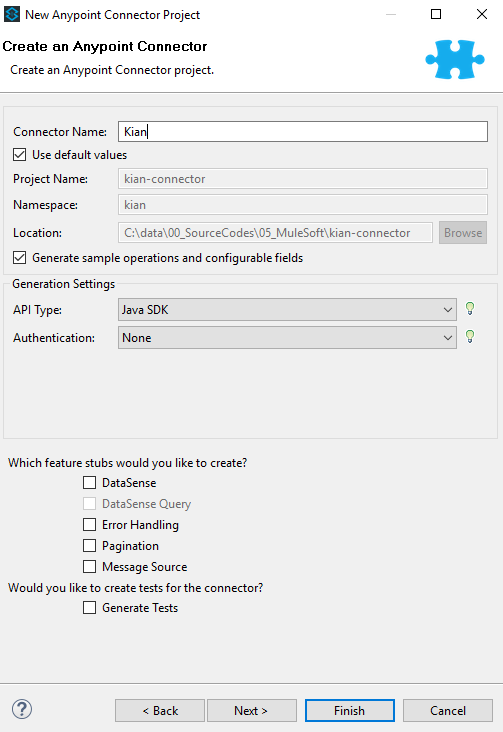 Once the connector is created, you will notice that you have two java class being created (depicted in Figure 3.0a).

Add the logger so that custom connectors would be able to log its data onto the mule log.

Now modify the java code from left to the one depicted in the below (listing 3.0a) with the loger code listing depicted right after it (listing 3.0b).

The last return line is important, if you return a string or anything else besides an event it will overwrite any payload that passes through your connectors, if this is not what you want then you should return an event instead.

Now after all these is done, the next thing you need to do is to build/compile the application and install it into your IDE so that you can use it in your mule application.

4.0 Installing into your IDE

After you have done all the steps in section 3.0 now you are ready to install your custom component/connector to be used in a regular mule application.

As depicted in Figure 4.0a, you need to right click on the custom connector project, go to Anypoint Connector, expand the sub menu and click on “Install or Update”. 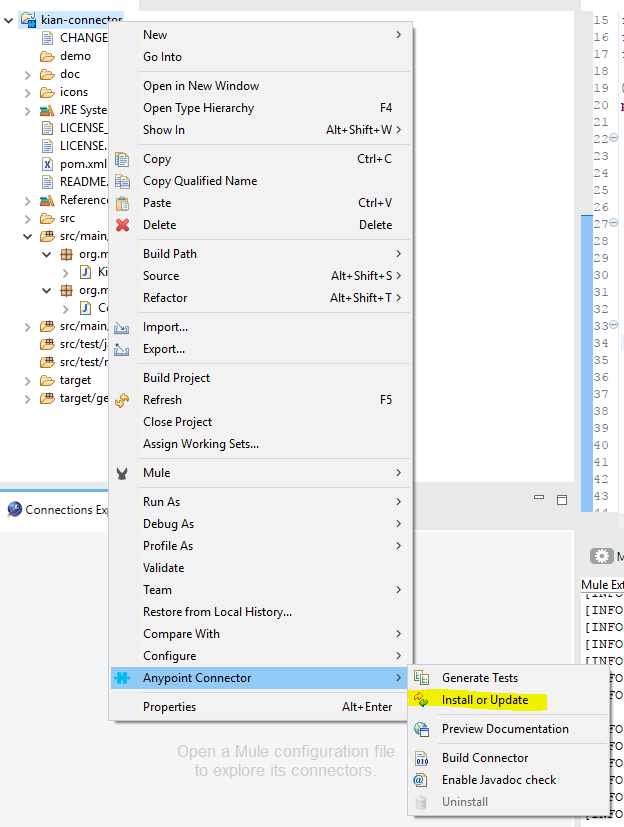 Once it is successfully installed into you IDE you will get the following prompt as depicted in Figure 4.0b.

This section I will demonstrate on how you could implement the previously built connector into a mule application. 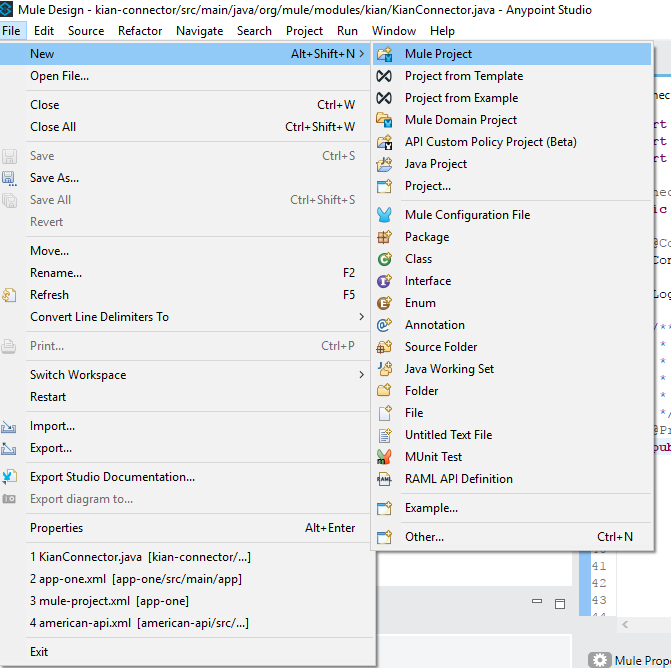 Now create a sample HTTP project with maven enabled (it is important to have it maven enabled because I want to show you how dependencies are created, when you start using the custom component) (as depicted in Figure 5.0b). 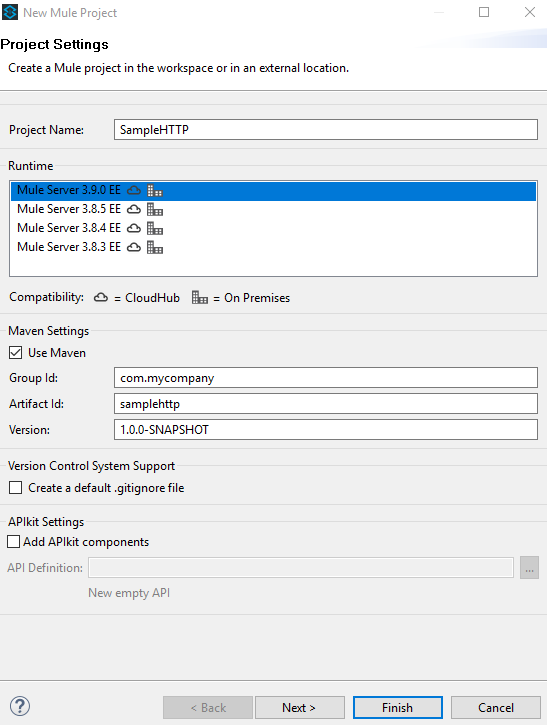 If you look at your connector configuration screen you will see 2 basic settings, the first one is the Connector Configuration and the second one is the Operation settings. (as depicted in Figure 5.0d) 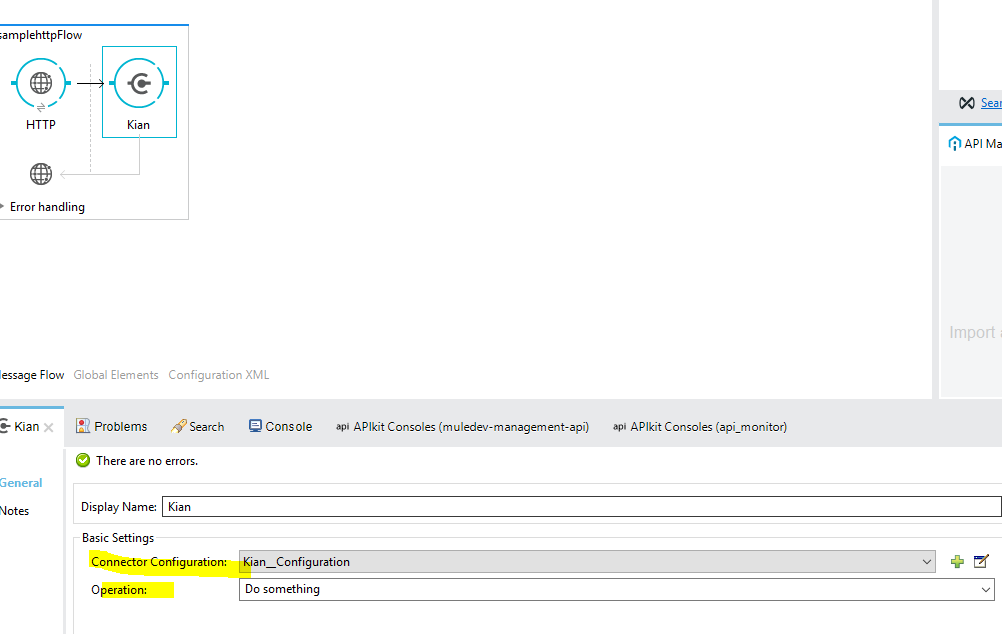 Now if you observe close enough under Operations you will see that “Do something” actually coincides with our method name of our previously written connector class (Figure 5.0e). 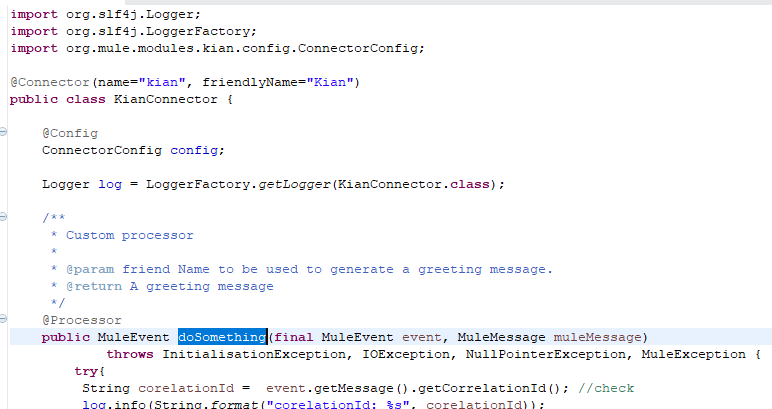 And if you go into the Connector Configuration of the custom component, you will see 3 text boxes, the first one being the name of the connector, and the two other text box under “General” tabs are Greeting and Reply (depicted in Figure 5.0f). 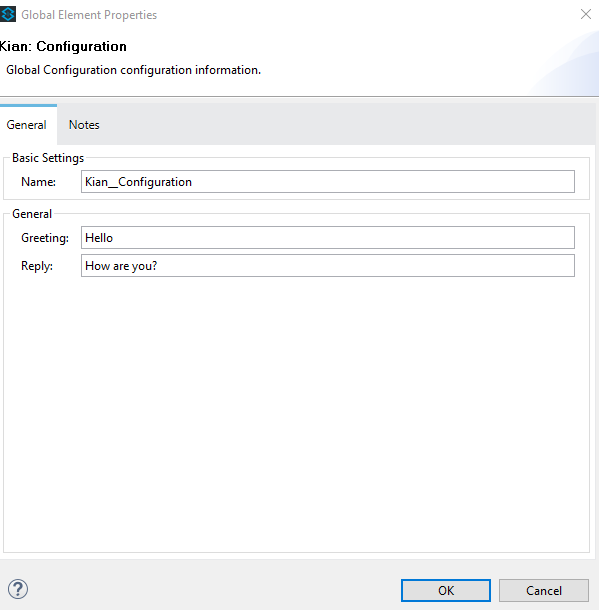 Figure 5.0f
Now if you contrast the two setting against the ConnectorConfig java class in our custom component you will see that mule actually creates a text box to capture each configurable property that we have coded into this class (Figure 5.0g). 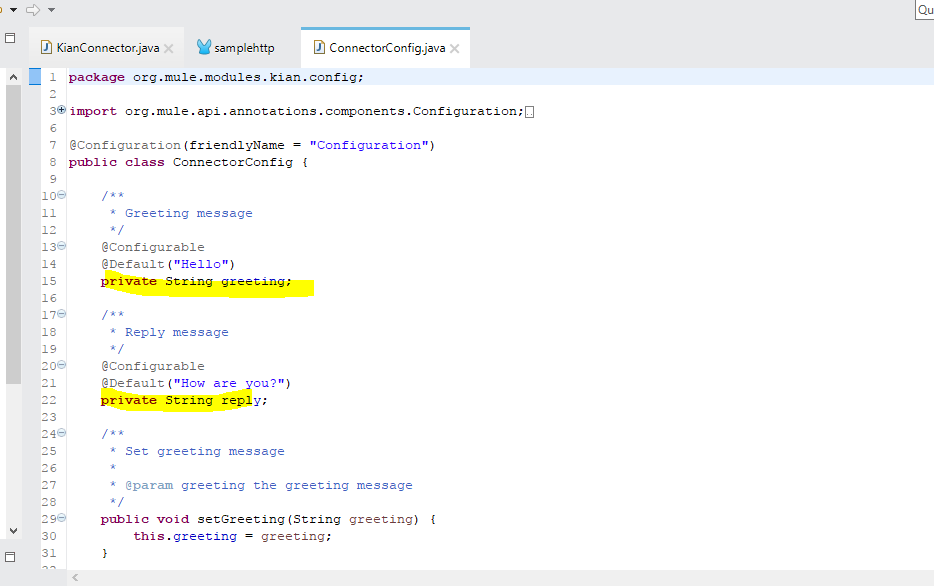 Now if you move on back to the IDE you will see that the implementation to log something is actually working because your IDE console would print out the following logs (Figure 5.0i).

You will see your payload being printed in the console and together with all it’s related stuff.

Right click on the project goto “Anypoint Connector” and then click on Uninstall (as depicted in Figure 6.0a). 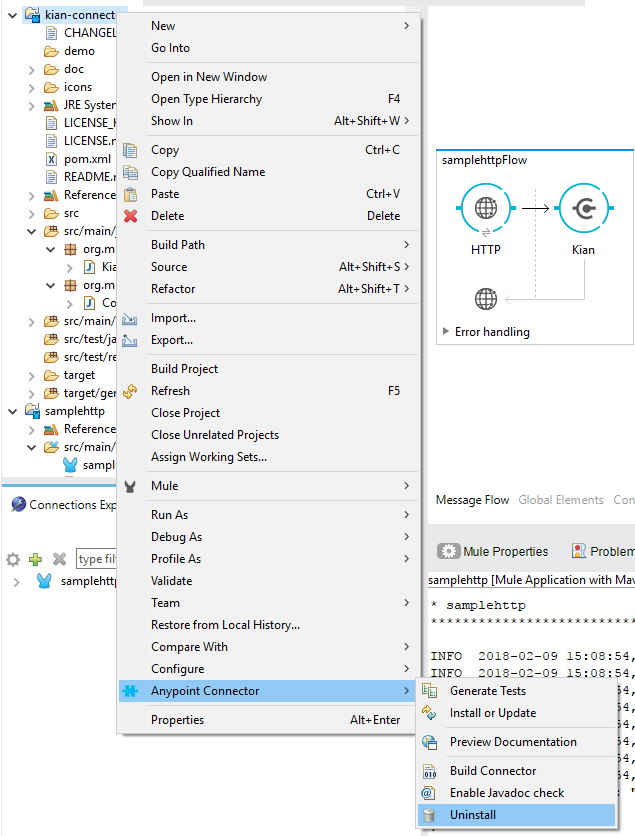 Once Un-installation is successful, you will see a pop up dialog box from your IDE as per depicted in Figure 6.0b.

If you click ok your IDE will restart to reflect the changes.

7.0 Noticing the impact of uninstalling the custom component

If you have successfully uninstalled your connector from the IDE, it doesn't mean that it will remove it from the projects that it is dependant upon. If you go back to the Mule App in which you have implemented the custom connector you will notice that the Connector is now greyed out, what this means is that the IDE don't recognize the connector (Figure 7.0a). 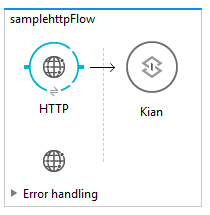 The second thing you will notice is that you can no longer find the custom connector from you IDE’s Mule Palette.

The third thing you will notice is that your mule projects maven dependency file (your mule app’s pom.xml file) will still contain entries for the custom connector (ie Figure 7.0b and Figure 7.0c). 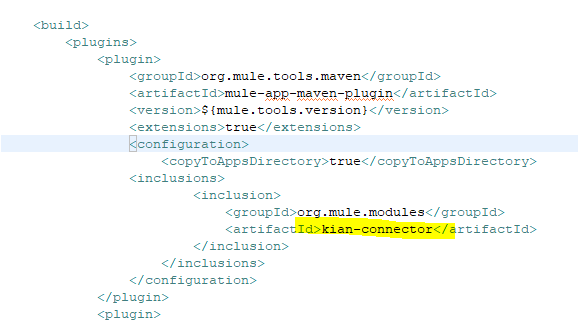 If you decide that you no longer want to use the custom component in your mule projects you need to remove them manually.

After uninstalling the custom component from the previous section now let's make further modification on it to print out the connector settings.

Go back to the Connector class and change the operations method to the following code.

If you face any issue reinstalling the connector, you just need to close the IDE manually remove the target folder and open up the ide to do the installation again.

Now if you run postman again, with the same settings as you have from the previous section, you will see that you have additional two log entries from your connectors (as depicted in Figure 8.0a). 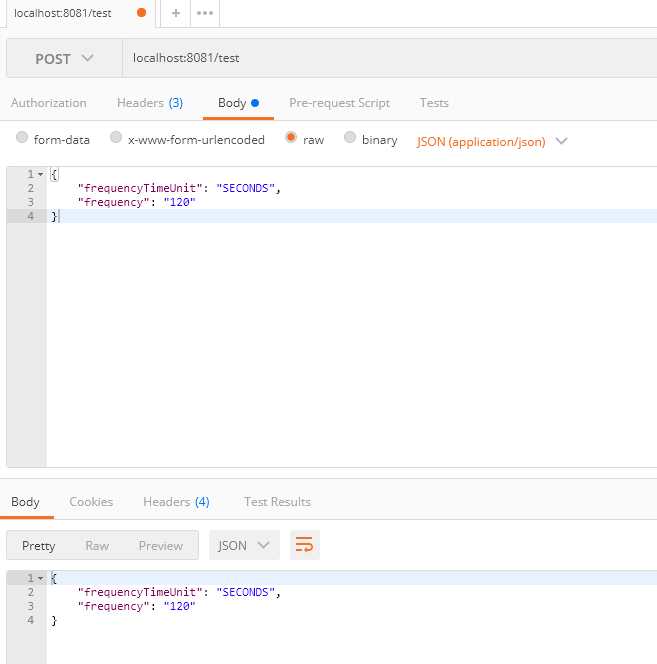 And you will see the following logs in your ide console (as depicted in Figure 8.0b).

When you build custom components/connectors you need to ensure that it is build to be stable otherwise it would affect the stability of your whole mule application. You will also need to devise sufficient testing strategy on the mule application so that no unstable version of it would be released to production for use. You will also need to decide if you want your custom component to carry out its operation in Asynchronous or Synchronous mode, by default all connectors implementation would be carried out in Synchronous fashion, if you want it to be otherwise you have to programatically code in the async feature.

The source code for this tutorial is avialable at the following link.
https://github.com/kianting/CustomConnectorTutorial